When we turn 40 years old, face begins to lose firmness and becomes languid. Little by little, eyebrows begin to fall, then the zone of the eyes, where eyebags grow and folds appear between cheeks and lips. Subsequently, the same thing happens to marks around the mouth, appearing folds that reach the chin. It is then advisable to undergo a facelift procedure that includes several surgical techniques designed to restore firmness to the face and get time frozen.  The technique to be applied is always chosen taking into account the needs of each patient – he/she opt for an elevation of the middle third facial through an endoscopy accompanied by a lifting of eyebrows or also from the lower eyelids through a blepharoplasty of the lower eyelid. It is also usual on our fifties to opt for a full face lift.

HIGHLIGHTS OF THE OPERATION:

Facelift (rhytidectomy) is a surgical technique that aims to eliminate age-related facial wrinkles. A method that is also known as facial renewal or facial rejuvenation. The aging process itself, the action of sun’s rays on the skin, daily stress and other factors such as smoking, drinking or a bad diet do impact on facial skin’s deterioration and wrinkles’ appearance. Most people, over time, see lines of expression and wrinkles emerging on their face. Also the way eyebrows fall, eyelashes fall, eyebags emerge in the eyes, new lines appearing in the lower part of the eyes, deep lines are appreciated in the mouth and in the part of the nose, cheekbones fall, contour of the chin is altered and skin curtains are formed in the neck. Not to mention the lack of vitality in the skin and the appearance of sun spots. Something that can be corrected with plastic and aesthetic surgery, being one of the best results offered in this field the facelift or rhytidectomy.
In facelift-lift surgery, the decay of the skin of the face and neck is stopped by eliminating wrinkles and leaving the skin smooth. In this surgery, the surgeon works on the cheeks to eliminate the fatty tissues of the neck, the facial tissues are reinforced, the eyelids are recovered and, if desired, it is complemented with other complementary interventions such as peeling the skin or botox injections. 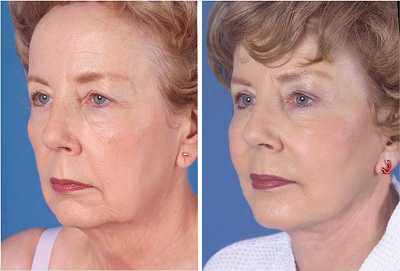 WHAT TYPE OF PATIENTS ARE ELIGIBLE FOR A FACELIFT?

Anyone who begins to notice a decay in their already-decayed skin, which loses elasticity, and this is not due to a health problem, can undergo a facelift. However, the majority of patients are men and women over 40 years old, and it is also possible to undergo a surgery at an earlier age.
After undergoing a facelift surgery, the face looks more beautiful and youthful appearance. It is usual for those who use this technique to combine it with other aesthetic surgeries such as those affecting the nose, eyelids, correction of forehead lines or eyebrow lift. In addition, it can also be combined with treatments such as filling fine wrinkles through the injection of oil or hyaluronic acid, such as peeling by laser, mechanical, chemical or as the application of botox firming.

When it is obvious that you are suffering a notable facial aging, or when problems such as skin decay are detected, it is time to come to a clinic to discuss your problem with your medical team in search of a solution to this issue. In the first appointment we explain to the surgeon what we want and why we want it, mentioning our desires and expectations. If it is clear to us that we are about to undergo a facelift or a facial rejuvenation treatment, we must raise all the doubts that arise about the pre-surgery, the intervention and the postoperative.

Facelift is performed in a hospital’s operating room and under the supervision of an anesthesiologist and a surgeon. General anesthesia and intravenous sedation based on tranquilizers is usually applied, although sometimes operation can also be done under local anesthesia. Depending on the type of surgery, it may last between 3 and 10 hours.  In most cases, patients go home after spending the night after the operation in the hospital. With regard to the additional operations usually performed during the visit to have a facelift (such as those of the nose, eyelids, etc.) these can be performed in the same session.
It is important to note that facelift surgery does not leave visible scars, being these only imperceptible marks hidden in the area of temples, ears and forehead, when not in the jaw, where an almost-unnoticeable mark of 3 to 5mm may show up below it.

Most of facelift postoperatives are comfortable. Although it is rare, some patients report some slight inflammations and bruisings, some numbness or tension in the facial nerve, often as a result of anesthesia. Symptoms that go away spontaneously between 3 and 5 days.

No matter how cumbersome the bandage may seem, it always leaves your eyes, nose and mouth uncovered. It is possible that small silicone tubes are used to prevent the accumulation of blood in the intervened area, which must be kept during the first two days. The bandage will be fully removed after 2 or 3 days. By then, a general inspection will be carried out and stitches will be removed after 5 and 7 days. You can wash your hair without problems from the first 48 hours on.

WHEN CAN WE GET BACK TO NORMAL LIFE?

In the event that, as usually happens, everything goes perfectly, the day after surgery the patient can get up normally and do their usual tasks, being able to work and even to use makeup once the inflammation has gone. It is advisable to avoid physical exercise for 2 months, as well as excessive sun exposure.